I think the very first graffiti was actually in Amsterdam, as a form of advertisement on billboards. Then that was followed over the next few decades by graffiti throughout Europe and all over North America. It’s hard to be specific but there were different groups of graffiti that began over the decades, and that’s how it ended up with those four major parts.

Do you think there was a particular era when the trend took hold on America’s streets?

If the graffiti trend was an American invention, why have it spread beyond the U.S.?

There is definitely a global aspect to them. With different culture cultures and countries sharing references there was usually some kind of link between them. For example if you saw somebody painting a graffiti art on a wall in the U.S. you’d be likely to see it in Greece; if you saw graffiti in a French city your friends might also know about it while they were on vacation in Italy or Belgium. So there’s a lot of potential for this stuff to spread throughout the world. 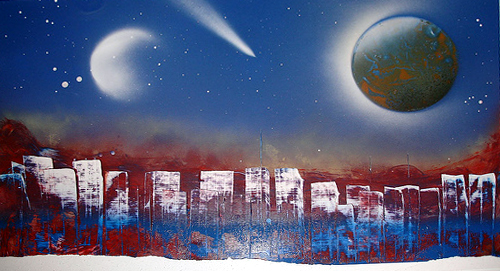 What does the street art business look like today? Do you think it’s really getting better?

Yes it is. I would say that there are more and more brands taking inspiration from the street art movement and selling it as their own product. This is definitely a more aggressive business model, and there are definitely more labels that are taking a stand. I feel a lot of it is just awareness and a thirst for new, exciting stuff. There are also some labels that are more aggressive in the way they market themselves and I feel that’s cool.

What do you mean by aggressive?

Well, they’ve definitely taken over the street art scene with their labels. You find the latest art pop up in their locations and they don’t go out of their way to get it. In fact, I think a lot of time when someone finds something new is because their label jumped on board and put it out there.